Home
Drinking
One of Sydney’s most historic hotels – the four-level Keg & Brew Hotel at Surry Hills – has reopened it’s doors following a full-scale, bottom-to-top $10 million refurbishment.
Situated on the corner of Foveaux and Commonwealth streets, just up the road from Central Station, the late 1880s, one-time terrace house will usher in an exciting new hospitality era in one of Sydney’s rediscovered precincts.
“The new-look Keg & Brew is a stylish reincarnation of the hotel which has been a significant fixture in Sydney’s pub life for more than 140 years,” says John Azar, whose Good Beer Company owns the 450 square metres property.

Painstaking observance to heritage requirements meant the original exterior of the building needed to be retained, while some features that were added by previous owners over the years had to be removed.The Good Beer Company, which also owns Paddington’s Four In Hand Hotel, the Duke of Gloucester (DOG) Hotel at Randwick and McMahons Point’s Commodore Hotel, engaged builder John Cameron Constructions and architects Woodhouse Danks to oversee the partial rebuild of the historic property in the heart of one of Sydney’s burgeoning commercial and lifestyle precincts. 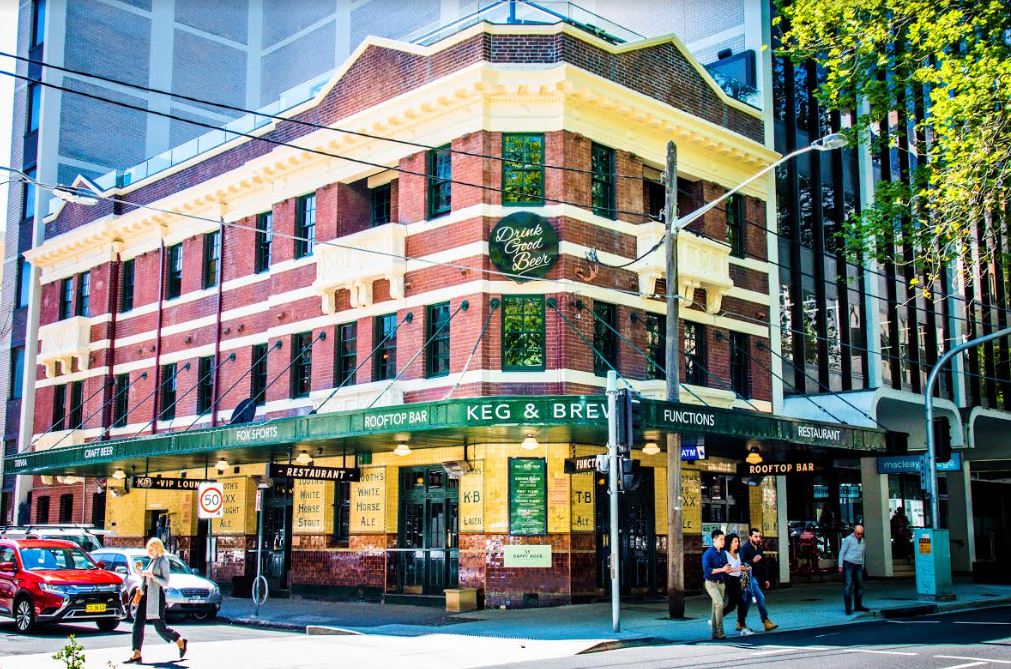 The Keg & Brew’s ‘new look’ presents a dramatically enhanced picture of the original pub which has long been one of the area’s most popular watering holes. The ground floor bar, which features thirty one of the hotel’s fifty taps pouring an eclectic selection of craft beer and mainstream brews, has retained its traditional pub feel, while gaming facilities have been extended to compliment the pub’s welcoming flavour.
The first floor features a 70-seat restaurant and bar in an area that, for many years, housed the hotel’s residential guests. The second floor function room and bar, which can be divided into smaller breakout rooms, offers hospitality options for up to 120 people. The final piece de resistance is the Keg & Brew’s open-air rooftop offering stunning, sweeping panoramic views of the city, complete with a bar, pizza oven and one of Australia’s largest state-of-the-art television screens.
The Keg & Brew hotel is located at 26 Foveaux Street, Surry Hills NSW 2010 and is open from
10am daily.
For more information head to:  kegandbrew.com.au