Camplify has pulled together a list of the most unique caravans in New South Wales to get campers back in the travelling spirit. From converted 60s Viscount’s to beautiful tiny homes on wheels, there’s a van for everyone in this round-up.

You’d never believe from her condition that the grandly named ‘Poppy the Viscount’ is in her sixth decade on the road. A 1965 Viscount Valiant, Poppy hangs out at Greenwell Point and is available for trips of three days minimum. You’ll see many beautifully converted vans during your road trips, but none as uniquely converted as Poppy, whose bedroom interior has a hotel room vibe. She comes with heating too, so you can travel in comfortable style at any time of year.

Another absolute beaut, Pingu is a 1995 Toyota Hiace converted by owner Justine as a lovely “tiny home”. The van comes with an outdoor kitchen, camping table and chairs, and kitchen equipment, but its uniqueness lies in its carefully thought out décor including a plant wall, hanging baskets and indoor greenery.

This well-fitted and compact three-berth campervan is a real beauty: a vintage 80s pop-up lovingly furnished with modern twists. What’s unique about Cashew is the oak finish to provide a log cabin feel – and we bet you don’t get pantry supplies, fairy lights and a TV in most 80s campers either. A gorgeous campervan with loads of mod cons.

Heading over to Sydney we have handsome Henry, an automatic-transmission camper that’s just had a full interior refurb. Henry scores high on the uniqueness scale, with a queen-size bed (kitted out with doona, pillows and two sets of fresh linen), Bluetooth stereo system throughout, LED lighting and enough storage under the bed for your surfboard, bikes or winter snow equipment. The owners even throw in a tub of snorkels, swimming gear and other beach kit.

Vincent, a 1977 Viscount Supreme, is a couple of hours’ drive from fellow Viscount Poppy and is based at Condell Park just south of Sydney. He’s a low-slung van with a uniquely decorated interior matched with bright polka dot curtains to make a cheerful and cosy sleeping and living space. Vincent also comes with his own annex and awning, gas bottle, fridge, freezer and TV.

A unique van round-up for New South Wales wouldn’t be complete without a van from Byron and this one is unique indeed. Designed as a “pop-up Art Hotel on wheels”, this handsome Airstream has everything you need for a unique, luxury and five-star glamping break. It comes with a TV, air-con, heating, a shower, barbecue, freezer and coffee machine alongside a plethora of other luxury van equipment: have a look at the listing to see the full scope. A beach umbrella and beach towels, Lekker bikes and helmets can also be supplied upon request, depending on where you opt to stay. 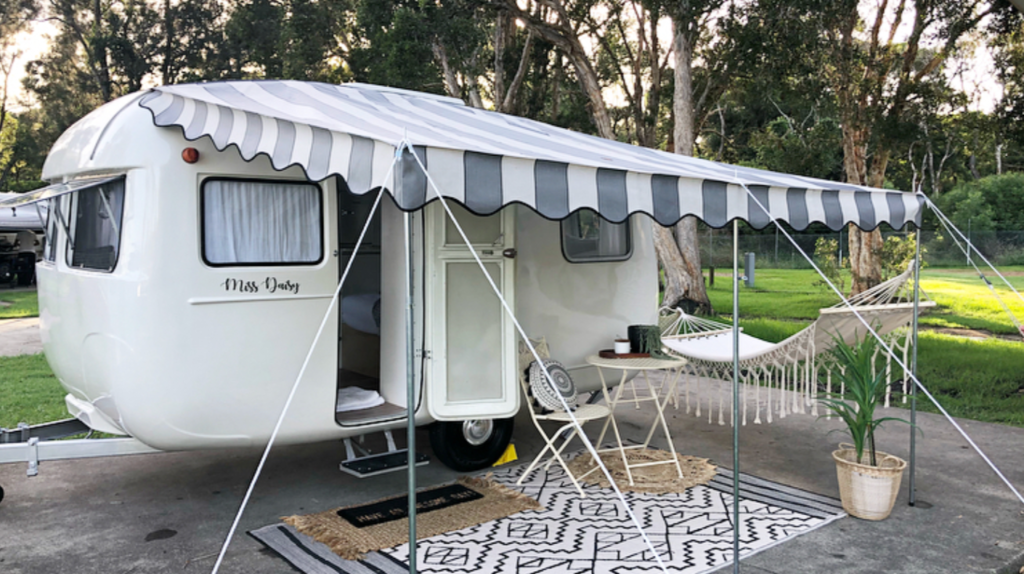