Home
Eating Out
Chicago meets New York in this exciting culinary collaboration between Chef Morgan McGlone (the mastermind behind Belles Hot Chicken) and the newly opened Redfern cafe, George St Deli. Inspired by the hit HBO show, The Bear, the special menu will feature items that pay homage to iconic dishes of the television series and the city of Chicago. Combining Chi-town flavours with New York staples, this is one pop-up you won’t want to miss.
Morgan McGlone is a third generation chef who is first and foremost, a food nerd. Starting out at culinary institutions in Sydney including Summit and Luke Mangan’s CBD Salt Restaurants, Morgan moved on to the States where he would spend years refining his skill, starting business endeavours and most importantly, being inspired by the hustle and diversity of the culinary culture. Now, in 2022, McGlone has a love for his craft backed by years of industry experience and has used it to open and run a plethora of successful restaurants across Sydney and Melbourne such as Flinders Inn, Belles Hot Chicken, Bar Clarine and Sundays. His latest hospitality endeavour has led him to the upcoming collaboration with the newly opened, yet widely popular George St Deli – a Redfern gem serving New York style Deli essentials.
Drawing flavourful queues from the highly talked-about tv show, The Bear – it’s no wonder McGlone gravitated towards this series for inspiration. Set in Chicago, the show follows a young chef from the fine dining world who goes home to Chicago to run his family sandwich shop. The Bear accurately sheds a light on the hospitality industry, which so many of us only view and experience from the outside – capturing the stress, chaos and mania behind the curtains of the pass.  “This series was by far the most accurate adaptation of how a commercial kitchen/restaurant is run. Having worked in a similar place, the start of episode 2 gave me goosebumps reminiscing of my time working in the states” – Morgan McGlone.
What captured the attention (and hearts) of viewers was the way the show highlighted the nuance of some of Chicago’s beloved and humble classics. From the Italian Beef Sandwich to the Chicago-style Hot Dog, the cuisine of Chicago represents the city’s ethnic culture and working-class base. And now, thanks to McGlone and George St Deli, Sydney-siders will have a chance to taste the flavours of Chicago (and some of The Bears most iconic dishes) this month.
Essential Information:
George St Deli x Morgan McGlone Pop Up
82/84 George St, Redfern NSW 2016
18TH NOV – 2ND DEC
– Pop Up Trading Hours –
Monday-Friday: 7:00am – 6:00pm
Saturday-Sunday: 8:00am-6:00pm 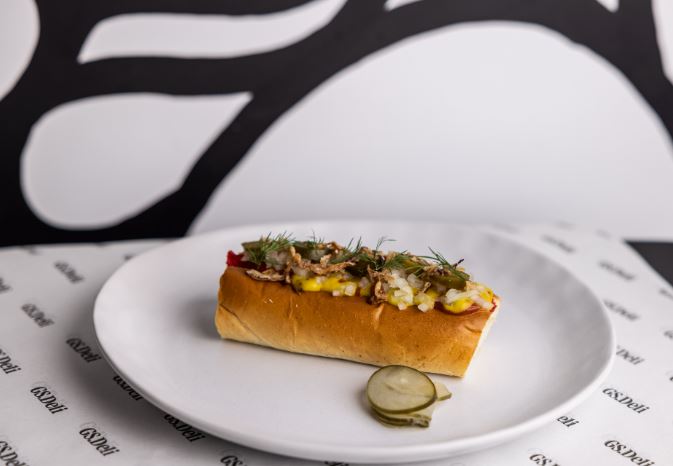