For the first time in Australian history, CADBURY will feature four female athletes on its iconic CADBURY DAIRY MILK block, to increase the visibility of women in sport and to inspire the next generation to see what they can be.

Now in its second year, the Women in Sport initiative is part of CADBURY’s ongoing commitment to support the continued growth and equality of women’s sports in Australia. CADBURY is utilising its famous purple packaging to showcase and present four female role models across the country.

With one in two girls dropping out of sports by the age of 15, CADBURY wants to increase the visibility of female athletes and put these inspirational role models front and centre in households across Australia.

Going even further, CADBURY is giving Aussies the chance to win tickets to women’s sporting matches across the country. The initiative enables Australians to take a girl to a game in the future and from 12.01am (AEST) on 01/09/2021 to 11.59pm (AEDT) on 28/11/2021, people can register their CADBURY DAIRY MILK pack online to go in the running to win tickets from various sporting codes. These tickets will enable opportunities for girls to see exemplary role models in action and demonstrate what is possible.

This year, CADBURY has also partnered with Women Sport Australia (WSA), a volunteer-led national advocacy body created to lead positive change for women and girls in Australian sports. The WSA is now partnering with CADBURY to support and shape the next 12 months of the program – with an exciting announcement coming in October – to ensure the initiative reaches and inspires as many girls as possible.

The new-look CADBURY DAIRY MILK limited edition pack designs will each have one of the incredible CADBURY Ambassadors printed on pack and will be available in stores from September 2021. 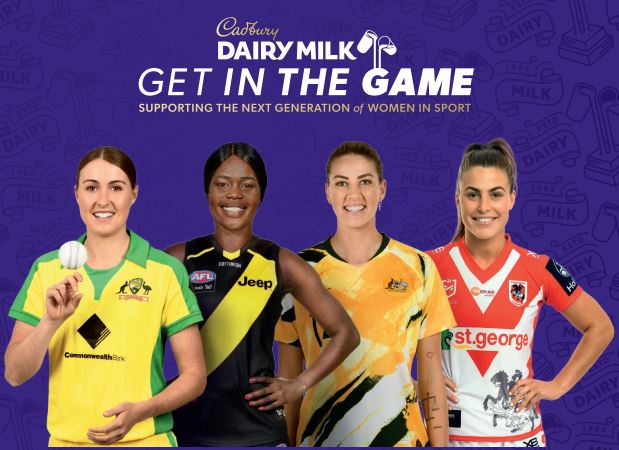